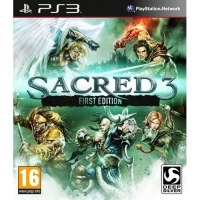 We buy for: £0.75
Sell PS3 Games. Get Cash for Sacred 3 First Edition. Sacred 3 is the next AAA instalment in an established and successful franchise that has sold over two million copies so far. It is a console-driven Action-RPG with breathtaking visuals, spectacular effects, iconic characters and highly addictive gameplay. Even in a team of legendary heroes, there is rivalry. In addition to its stunning single player adventure campaign, Sacred 3 brings a whole new aspect to the genre: competition! Opposing teams and individual players can now compete thanks to skill based gameplay, a strong multiplayer experience and countless online community features. It's not just about winning the game, it's about crushing your competition. Features: * Explosive and accessible action experience. * Intense multiplayer - captivating single player. * Sophisticated game design and addictive reward-system. * Deep, immersive universe with rich lore and distinct cultures.