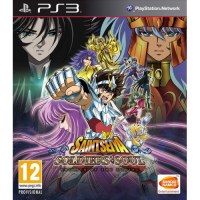 We buy for: £15.24
Sell PS3 Games. Get Cash for Saint Seiya: Soldiers Soul. A Legend Will Be Reborn! The long awaited return of Saint Seiya is here with Saint Seiya Soldiers’ Soul! The legendary Gold Saints come back to life wearing their God Cloths in a new anime series broadcasting worldwide from April 2015. Saint Seiya Soldiers’ Soul leverages the power of the new generation consoles for spectacular graphics, more robust gameplay and intense battles, and many exciting new features to be announced soon! Stay tuned! Was the sacrifice of Gold Saints and the defeat of Hades the end of everything? The Gold Saints who gave their life in Hades dark kingdom, allowing Seiya and his friends to enter Elysion, go back to life, along with their legendary Gold Clothes, blessed by divine power...Does this mean they have something to accomplish yet? Features: • The long awaited return of Saint Seiya: a new anime series and a new video game! Gold saints with God Cloths will join the game’s original mode for the first time. • Burn your cosmos on the PS4: The battle to protect Athena arrives on PlayStation 4 for the first time. Experience battles in 60fps on PlayStation 4. The game is also available on PlayStation 3. • The story of Saint Seiya: Follow the storyline from the Twelve Zodiac Temples arc to the battles against Hades as well as other surprises. Relive Saint Seiya’s memorable storyline with beautiful 3D cut scenes. • Improved gameplay, combos and new moves: Deeper immersion and even more exciting Saint Seiya Cosmo battles with the addition of aerial combos and range variation. Special moves will be enforced, making the game more strategic and exciting!