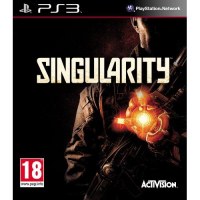 We buy for: £1.05
Sell PS3 Games. Get Cash for Singularity. It's 2010. A powerful and wealthy Russian mercenary has reopened a mysterious research base on Katorga-12, an island off the coast of Siberia. This island was the site of Soviet experimentation in the 1950s that led to a catastrophic, Chernobyl-sized accident - the Singularity - that fractured time itself. Katorga-12 was abandoned, locked down and shrouded in secrecy until today. You play as Nate Renko, a U.S. Air Force pilot sent on a recon mission to investigate new, wild readings coming from Katorga-12. Your plane is brought down, and you quickly find yourself in the middle of a massive Russian cover up that started during the Cold War and that threatens all of humanity today. You fight to survive, and to stop the Singularity from spreading and destroying the world.