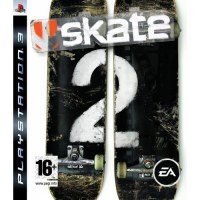 We buy for: £3.05
Sell PS3 Games. Get Cash for Skate 2. It's been five long years since your mysterious disappearance from the skate scene, and much has changed in the wake of “the disaster-too-gnarly-to-be-named.” The massive devastation left large swaths of San Vanelona completely destroyed. After the mass evacuation, one company, Mongocorp, won the bid to rebuild New San Vanelona and their zealous protection of their private property has put a damper on the once thriving skate population. Your mission is to rebuild your career and revive the New San Van skate scene. To help you get the job done, you'll have double the tricks and the new ability to get off your board to move stuff and create the sickest lines. There's even a crew of locals you can call on to help take care of business. Skate 2—it's time to take back the city … one spot at a time. Key Features: * Double Your Bag of Tricks—Take to the streets and own the spots of New San Van with new tricks like one-foots, handplants, hippy jumps, and more. * Move It! —Get off your board and move stuff to create your ultimate spots to skate and destroy. * Change the Face of the City—You can't rebuild the scene alone—call on your crew to uncap the spots, drain the pools, and provide some personal security. * Hall of Meat—Punish your skater in the harshest ways possible with all-new bone-crushing bail physics. The new Thrasher Hall of Meat mode features brutal slam challenges complete with gestures to customize your gnarliest bails. * Create Spots—After you've moved stuff around to create the best spots, show them off. Upload your custom spots, download other gamers' stuff to skate, and vote on whose spots rule. * Even More Online Skating—Roll seamlessly between single player and online skate sessions and compete for cold hard cash and/or glory in the new competitive online modes. * Express Yourself—Use the Graphics Creator to build custom graphics, then slap them on your hats, hoodies, and decks. Now that you've personalized your skater, film your sickest lines with the expanded skate.Reel and share your vids with the world.