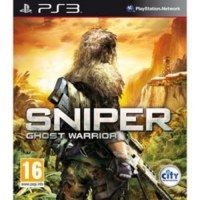 We buy for: £1.05
Sell PS3 Games. Get Cash for Sniper: Ghost Warrior. Sniper: Ghost Warrior is a first-person tactical shooter that features game mechanics based primarily on realistic covert actions of a military sniper. Combat is mission-based and centers on extended stealth gameplay that challenges players with a variety of strategic and tactical choices that affect how they approach their objectives and eliminate their targets. Sniper gameplay is designed to be realistic, with the player required to cooperate with their AI spotter for pinpointing of targets, maintain heart beat and breathing control -- especially after running -- for maximum accuracy and performance and develop expertise with four types of sniping rifles: AS50, MSG90, SR25 and SVD Dragunov. Players in sniping situations also must deal with conditions such as wind, fog and rain that will test even the most skilled of shooters. Additional features include multiplayer support, a slow-motion Bullet Cam Mode, an arsenal of explosive weaponry like Claymore mines and C4 explosives to defend your perimeter when and/if your position is discovered or to demolish enemy outposts, melee weapons like throwing knives for close, quiet kills and the additional ability to cooperate with a hard-charging assault team member bent on up-close and personal firefights. Exclusive Upgrades for PS3 Sniper: Ghost Warrior for PlayStation 3 contains more content right out of the box as well as more play modes and functionality than the PC or Xbox 360 versions that came before it. In addition to all the standard missions, weapons and modes available in the previous retail versions, PS3 players can look forward to improved graphics optimized for PS3, all the DLC content released to date, new rifles and AI improvements, PS3 exclusive single player missions, bonus multiplayer maps and new modes including a bonus single player Challenge Mode and exclusive multiplayer modes: Capture the Flag and a Hardcore Difficulty Mode. Key Game Features The most realistic sniping experience in a video game ever, right down to managing your breathing for increased accuracy of sniper shots. Enjoy a fully realistic ballistic system that accounts for bullet trajectory, including bullet drop and environmental effects such as wind, fog and rain. Bonuses and feature exclusives unique the PS3 game version. Fully upgraded game play and graphics. Exclusive single player missions for PS3 owners. Bonus multiplayer maps. Exclusive new multiplayer modes including Capture the Flag and Hard Core difficulty mode. Exclusive new sniper rifles including the L96 and the M200 Intervention. Bonus single player challenge: Additional mission with Hard Core mode to challenge the very best players. Pull off the perfect headshot and watch your bullets strike the enemy with pinpoint accuracy in Bullet Cam Mode. Cooperate with your spotter for a better performance. An arsenal of explosive weaponry is at your disposal. Defend your perimeter with Claymore mines, demolish enemy outposts with C4 charges and make silent kills with throwing knives. Four standard types of sniping rifles: AS50, MSG90, SR25 and SVD Dragunov. A variety of mission types ranging from sniper vs. sniper elimination, real-time tactical assault and fixed machine gun combat. Built on the Chrome engine which immerses players in lush jungle and detailed industrial environments. Nonlinear gameplay allows players to decide how they wish to approach a situation. Challenges may be completed in several different sequences, giving players the freedom to explore. Multiplayer mode option supporting up to 12 players.