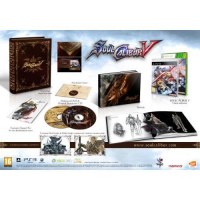 We buy for: £10.34
Sell PS3 Games. Get Cash for Soul Calibur V Collectors Edition. Soul Calibur V, the newest instalment of the multi-million selling weapons-based fighting series. Delivering exhilarating 3D fighting mechanics, breathtaking visuals, and new characters as well as expanded online and character creation modes, Soul Calibur V is poised to become the preeminent fighting game experience of 2012. Developed by the legendary Project Soul team, Soul Calibur 5 picks up 17 years after the events of Soul Calibur 4 with new heroes and returning warriors clashing in an epic showdown between good and evil. The tale of Patroklos, son of Sophitia Alexandra, unfolds as his family's destiny intertwines with the Soul swords. With the series' revolutionary 8-way run, allowing for true 3D movement during matches, a refined battle system, and enhanced A.I.