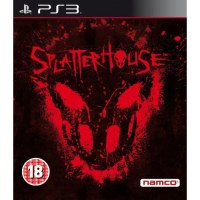 We buy for: £18.05
Sell PS3 Games. Get Cash for Splatterhouse. Follow Rick and his mysterious Terror Mask as he unmercifully tears, cuts and beats his way through denizens of unearthly creatures in an epic adventure to rescue his girlfriend from the clutches of deranged occult figure Dr. West. Embodying the unfiltered, primal aggression of its namesake, Splatterhouse combines visceral,adrenaline-soaked combat with horror elements to deliver an original gaming experience that defies the boundaries of the traditional action category with over the-top gore and shocking new gameplay mechanics. Features * The Classic Franchise Returns - An innovative reinvention of a classic category-killer with an original storyline inspired by Gordon Rennie (Necronauts, Judge Dredd) * Re-imagined enemies - Favorite enemies have evolved into horrific monsters of radical proportions and shocking detail * Extreme Gore - Splatterhouse pulls no punches, taking gore and shock value to the next level with physics-driven fluids and organ parts flying in all direction * Pulse-Pounding Combat - Use Rick's deep set of moves, improvised weapons, environmental attacks, and unique enemy AI to obliterate enemies at each turn. o Engaging combo system that opens up to gruesome Splatterkills, which destroy your enemies with gory and cinematic effects. Use the Analog stick movements to literally tear an enemy apart at will. o Terrifying enemies and epic-scale bosses provide unnerving experiences and memorable challenges o Diverse stages and advanced environments with H.P. Lovecraft-influenced style are coupled with a world-class heavy metal soundtrack and custom music score, keeping the tone tense and eerie o Weapons Use: weapons of all kinds to bludgeon your enemies, ranging from classic 2X4's to chainsaws to your enemies' own limbs