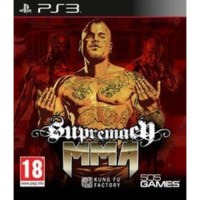 We buy for: £0.75
Sell PS3 Games. Get Cash for Supremacy MMA. The only rule of Supremacy MMA is that there are no rules. Dive into the gritty underworld of unauthorized underground MMA fighting! Supremacy MMA brings the brutality of unsanctioned, unlicensed MMA fighting to your console with fast and furious gameplay and underground aesthetics. This game aims to raise the bar in the MMA space by bringing unprecedented level of fast fluid combat, intuitive controls and true to the sport brutality. Choose a fight style and claw your way from obscurity to Supremacy. Game Features: * Brutal Bloody Combat: Realistic blood, breaks, snaps, tears and MMA pain. * Fast Arcade Action: Fast, fluid Arcade fighting action. With intuitive controls It's easy to Pick up and play, but hard to Master. * Authentic Fighting Styles: Choose from a wide variety of authentic styles and fighters. * Story Mode: Work your way through Different complete and dramatic storylines. * Experience System: Learn to block, counter, grapple, strike, parry while gaining XP and climbing your way up through the ranks to true Supremacy. * Online From the Ground Up : Online built from the ground up for an AWESOME fighting Experience. * Exotic Locales: From the Underground Gambling Halls to Muay Thai Training Camps to Japanese Arenas, you will make your way across over a dozen unique and exotic environments complete with Circular Rings to Geometric Cages. * The first MMA game to feature female fighters.