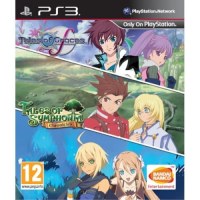 We buy for: £22.39
Sell PS3 Games. Get Cash for Tales of Graces f & Symphonia Chornicles. Tales of Symphonia Chronicles. Live again the unforgettable and moving Tales of Symphonia saga in HD! Using characters designed by renowned Japanese artist Kosuke Fujishima, Tales of Symphonia unfolds with beautiful anime-style cel-shaded graphics that make the expansive 3D worlds feel like a 2D comic book. The storyline is an emotionally charged, epic adventure that redefines the role-playing genre. Tales of Symphonia Chronicles Features: * The most renowned Tales Of game comes back in HD. * The possibility to play with the Japanese voiceover. * The whole saga of Tales of Symphonia combined in one game. * More than 90 hours of Gameplay in total. * Addition of new fierce Bosses. * Brand new 40 artes scattered between playable characters and enemies. Tales of Graces F. Tales of Graces F redefines the fantasy RPG genre with its blend of anime-inspired graphics, enthralling depth of story and fast paced, strategic battles. Set amidst the conflict of three kingdoms competing for planetary dominance, the story follows Asbel Lhant and his friends on their adventure to protect the bonds between them, unaware that in time, their quest will shake the world itself. Tales of Graces F Features: * Experience over 50 hours of gameplay on the PlayStation 3: Go deep into the story and world of Tales of Graces f with more than 40 hours of core gameplay. After the main quest, take on the Lineage & Legacies epilogue, featuring another 10+ hours of story! Explore new dungeons, fight fierce new monsters, and wield newly created spells, attacks, and techniques! * Stunning Visuals: High Definition graphics and stylish cell shading bring attention to the detailed anime art style. Beautiful and spacious environments give players the freedom to explore a truly open world. * Master New Combat Styles: Command the “Style Shift - Linear Motion Battle System” to freely switch between fighting styles and deftly evade enemy attacks. Activate “Accelerate Mode” to use powerful new techniques and bring the fight to enemies like never before! * Unique Multiplayer System: Enlist the help of up to 3 friends to fight by your side! Players can join the battle at any time simply by plugging in a controller!