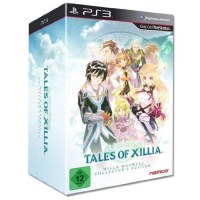 We buy for: £37.24
Sell PS3 Games. Get Cash for Tales of Xillia Milla Maxwell Collectors Edition. Tales of Xillia follows Jude Mathis, a clever medical student attending school in the capital city, and Milla Maxwell, a mysterious woman accompanied by four unseen beings. Players will be able to choose either Jude or Milla at the outset of their adventure through the world of Rieze Maxia, where humans and spirits live together in harmony. The kingdom of Rashugal has been experimenting with a powerful source that led to draining the mana from the world. Realizing the harm it is inflicting on the world, Jude and Milla set off on a journey to destroy it and restore the mana back to the world. Features: A new way of graphic expression — Achieved by the development team’s technique and knowledge accumulated over 15 years, the world and characters are portrayed in their natural, life-size state so that players can feel the characters and objects in the game as if they really exist there. Dual Raid Linear Motion Battle System - The latest version of the most dynamic battle system seen in JRPG gaming that allows players to have an advantage in the battle by using Linked Combat System to link two characters to team up in terms of attack, defence and support. Players can enjoy more tactical battles by changing the party members with backup members even during the battle. Deep and rich storyline described differently from two main characters’ point of view – Pick from two main characters and unfold the storyline from each point of view and experience exclusive events that only appear when playing in Jude route or Milla route. Huge game content – In addition to the main storyline, explore the beautiful world of Rieze Maxia and take part in mini-quests, sub-plots to find unexpected aspects of the characters and many other features found throughout the world. First collaboration between the two prominent character designers – Beautiful anime-style character designs from Mutsumi Inomata and Kosuke Fujishima who have designed lots of characters for previous games in the Tales of series. Hyper linked combos – While characters are linked, their cooperative gauge called “Linked Artes Gauge” will fill up. Once the gauge is filled to some extent, characters can perform special attacks called “Linked Artes” that change variously depending on the arte the controlled character uses. Once the gauge is full, the player can perform Linked Artes combos until the gauge becomes zero.