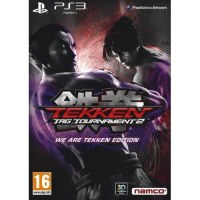 We buy for: £13.04
Sell PS3 Games. Get Cash for Tekken Tag Tournament 2 We Are Tekken Edition. Never underestimate the heart of a champion. The original tag team fighter that started it all is back. Tekken Tag Tournament 2 delivers new and returning characters in the largest roster ever. Experience the most advanced attack mechanics, ultimate combo move sets and new battle modes. With innovative features to broaden Tekken consumer accessibility, unlimited fighter combinations & multiple ways to challenge your friends – get ready for the next battle! * MULTIPLAYER MATCH – challenge your friends in a 2-on-2 tag-team battle, 1-on-1 or 1-on-2. * PAIR PLAY – up to 4 players can each control a character in the ultimate team battle. * FIGHT LAB – all new mode to customize Combot's appearance & for the first time ever, his moves. * LARGEST PLAYABLE ROSTER – more than 50 characters to choose from. * NEW STAGES – fight in your favourite countries around the world. * OFFLINE BATTLE MODES – re-live the classic arcade mode, train in a first-class practice mode, customize your team/character appearance & much more.