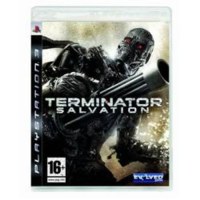 We buy for: £1.05
Sell PS3 Games. Get Cash for Terminator Salvation. Terminator Salvation the videogame is an intense action-packed third-person shooter featuring concentrated armed combat against all of the Skynet enemies from the film and new killer machines specifically designed for the game. Taking place two years before the events of the upcoming film set in a post apocalyptic, decimated Los Angeles, players will be lead through a visceral, story and character driven gaming experience. Featuring intense third-person action, Terminator Salvation the videogame will take combat to the next level with iconic enemies, cinematic fight sequences and advanced weaponry, drawn directly from the film, as well as an innovative, multi-layered cover mechanic. Product Features: * New Installment of Terminator Mythology: Set two years prior to the upcoming Terminator Salvation film, players will get the opportunity to be John Connor for the first time and continue the epic fiction of the Terminator mythology. * Unrelenting Intelligent Robotic Enemies: Unrelenting and incredibly resilient iconic enemies from the Terminator franchise fight to the bitter end on land and in the sky. Designed to pursue the player by any means necessary, damaged or broken enemies will literally claw their way forward to inflict harm. * Advanced Destructible Cover Gameplay: Terminator Salvation – The Videogame will incorporate advanced cover mechanics which allows players to use the destructible environment as protection and strategically navigate through enemy entrenched territory. The cover mechanic’s multi-faceted design changes the way “cover” gameplay is executed. * Diverse Array of Advanced Weaponry: The player has access to a wide array of weapons including shotguns, fully automatic machine guns, huge mounted weaponry, grenades, rocket-launchers and even a plasma firing Skynet tank. * Rugged Armored Vehicles Gun Fights: Pursue, attack, or evade enemies through post-apocalyptic environments on foot or inside rugged armored vehicles in extremely kinetic and extensive cinematic gun battles.