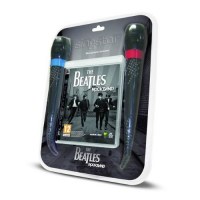 We buy for: £3.05
Sell PS3 Games. Get Cash for The Beatles Rock Band 2 Microphone Bundle. Rock Band: The Beatles is the music game experience that allows players to follow the legendary career of The Beatles from Liverpool, to Shea Stadium to Abbey Road. Featuring the ability to play drums, lead guitar, bass guitar or sing three part harmony with up to three microphones, Rock Band: The Beatles will focus on authentically recreating the feeling of performing The Beatles music on stage and in the studio.