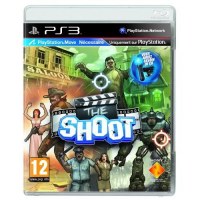 We buy for: £0.15
Sell PS3 Games. Get Cash for The Shoot. The Shoot is an over-the-top arcade shooter that allows players to inflict mass destruction on the various sets of an action movie. Players can shoot, punch, dodge and perform special moves to tear up highly destructible movie scenes and put down uniquely themed enemies. Impress the Director and the critics to land subsequent roles and have a shot at becoming the ultimate action movie star. Features * Requires PlayStation Move * Motion controller-based gunplay including powerful special attacks, such as Rampage, Showtime and Shockwave that allow players to wreak havoc on action movie sets * Highly destructible environments that can be shot away to expose enemies, secret power-ups, bonus items and deleted scenes * Five themed movie sets including Haunted House Party, Outlaws, Robot Rebellion, Deep Perils and The Mob