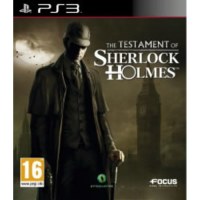 The Testament of Sherlock Holmes

We buy for: £4.02
Sell PS3 Games. Get Cash for The Testament of Sherlock Holmes. Set in London in 1898, all evidence of an on-going police investigation points to Sherlock Holmes as the main suspect in a case involving theft, fraud, and murder. Unable to prove his own innocence, Holmes rapidly loses the trust of London. When even the loyalty of his closest friend, Doctor Watson, begins to waver, Sherlock is forced to flee Scotland Yard and begin his investigation to prove his innocence, confronting his most dangerous opponent in the process: Moriarty! Use the famous detective's full repertoire of skills to solve puzzles and decide which leads to follow up and which to ignore as you build your case in this open investigation. Key Features: * A dark and mature storyline takes the Sherlock Holmes series to the next level. Lead your investigation and build your own conclusions. * A brand new graphics engine specially designed to display complex scenes and high resolution textures. Improved light effects and new animations and moves truly raises the bar for console adventure games, helping to create a London faithfully reproduced. * Dozens of puzzles and riddles with controls especially designed for consoles: collect objects, interact with dozens of characters, and use special tools throughout your investigation. Once you have collected your clues and reports, use the Deduction Tool at the end of each chapter to draw your own conclusions. * An intuitive help system is available in case you are unable to find the solution to a particularly difficult puzzle.