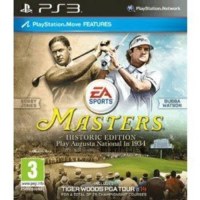 We buy for: £12.49
Sell PS3 Games. Get Cash for Tiger Woods PGA Tour 14 Masters Historic Edition. The world's number one selling golf video game franchise will take you back in time and celebrate golf's rich history by giving you the opportunity to play against iconic legends and relive all four golfs majors. Challenge some of the biggest names of golf, such as Arnold Palmer, Jack Nicklaus, Bobby Jones, Tiger Woods and others as you try to rewrite golf history on some of the world's most prestigious championship courses. Eclipse their legacies and earn your seat at the table of legends! Tiger Woods PGA TOUR 14 features the most courses ever offered on disc – a total of 20 courses. Another new feature to the franchise is the introduction of the LPGA. Take a break from the grind of tournament golf and play night golf, a first for the franchise, and watch your drives streak through the dark skies with an illuminated ball. Tiger Woods PGA TOUR 14 has something for everyone. Features: * Take Down Legends – Tiger Woods PGA TOUR 14 now features eight legendary golfers, Seve Ballesteros, Ben Hogan, Bobby Jones, Jack Nicklaus, Arnold Palmer, Gary Player, Sam Snead and Lee Trevino. In the all-new Legends of the Majors mode, players will relive the rich history of golf and match up against the sport's greatest players, as they attempt to take down these golf icons. In addition to battling these renown golfers, you can play as them and relive some of golf's historic moments. You will also be transported through various eras wearing period-specific attire, starting in the late 1800's all the way up to present day. * Play All Four Major Championships – For the first time in franchise history, players have a chance to go for the Grand Slam by participating in historical events from all four majors: the Masters Tournament, the U.S. Open, the Open Championship and the PGA Championship. * New Courses and Golfers – More courses are available on disc than ever before, with a total of 20 championship courses featured in Tiger Woods PGA TOUR 14. Five new courses make their debut in the Tiger Woods PGA TOUR franchise including Jack Nicklaus' home course, Muirfield Village, home of PGA TOUR's Memorial Tournament and Oak Hill Country Club, host course to the 2013 PGA Championship. This year's game also features a robust pro golfer roster with over 35 playable characters! New additions include 2011 PGA Champion Keegan Bradley, Bud Cauley, Lexi Thompson and 2012 LPGA Player of the Year Stacy Lewis.