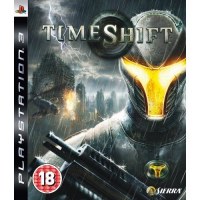 We buy for: £0.50
Sell PS3 Games. Get Cash for Timeshift. Ever since the quantum time jump and betrayal of Krone occurred, life as it was known ceased to exist. What was once a pristine and thriving city, Alpha District is now an alternate reality wrought with chaos and destruction. Join the rebel forces in the highly anticipated first-person shooter that features your ability to master time to become the ultimate weapon. Features: · Master the ability to stop, slow, and reverse time to become the ultimate weapon · Fully textured environments featuring incredible rain effects creating the backdrop to an intense dark and gritty world of chaos · 9 weapons each includes 2 functions that allow players to completely annihilate their competition · 16-person multiplayer features 14 maps to create time stopping chaos and massive destruction to an already devastated world · Multiplayer includes 6 unique heart-stopping, time-crunching modes that include Stop the Machine, King of Time, 1-on-1, and the classic deathmatch / team deathmatch