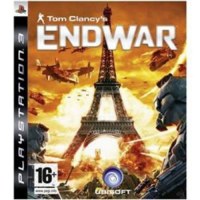 We buy for: £0.15
Sell PS3 Games. Get Cash for Tom Clancys EndWar. True to the Tom Clancy's video games' tradition of innovation and excellence, Tom Clancy's EndWar is an all-new breed of strategy game. Designed from the ground up for consoles, it is a fusion of next-gen. technology, superior design and first-class production values. 2020, with resources growing scarce every nation must look after themselves. Tensions between the US, Europe and Russia are near a breaking point. One spark will ignite the war to end all wars. ENDWAR lets players experience this geopolitical epic in two distinct phases: Key Features * World in Flames A chillingly realistic vision of World War 3, in the fashion of the best techno-thrillers… Set in 2020, Tom Clancy's EndWar explores a full-scale land war between superpowers. While the narrative engrosses the player in a massive global conflict, with battles taking place in American and European heartlands, on 40 real-life recognizable battlefields including Washington D.C., Paris and Moscow. * Shock and Awe Tom Clancy's EndWar exploits the capabilities of next-generation consoles to deliver production values comparable to the best action titles, rendering the chaos and grandeur of tactical combat more vividly than any game before it. * Control amidst chaos The game's intense depiction of land warfare never overwhelms the player because Tom Clancy's EndWar's console-based design and interface empowers him to constantly maintain situational awareness and execute orders with the dispatch of a tactical genius. Simplicity ensures that success depends on tactical decision-making, not manual dexterity. * Massive replayability In every way possible, Tom Clancy's EndWar is designed for maximum replayability.