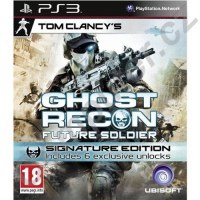 We buy for: £0.15
Sell PS3 Games. Get Cash for Tom Clancys Ghost Recon Future Soldier Signature Edition. Armed with the most advanced combat technology, the Ghosts are an untraceable unit of soldiers who track down the highest-value targets in the highest-risk conflict areas around the world. In the near future, 4 of these elite soldiers serve as the tip of the spear in a hidden war raging across the globe. As the Ghosts accomplish their objectives, they discover a far greater threat - one that could alter the international balance of power forever. Tom Clancy's Ghost Recon: Future Soldier features: * Join the Legendary Ghosts - Control Sergeant Kozak and his unit, across 14 missions in 8 spectacular locales, from Africa to the Arctic Circle. * All-Access Pass to Future War Tech - Fight using the tech of tomorrow, including optical camouflage, augmented reality, drones and more. * Wield over 50 Weapons and Customise Them with Gunsmith Mode - Harness the immense firepower of an army and optimize every aspect of your arsenal in the Gunsmith mode. * Intense Multiplayer - 4 game modes, 10 maps and multiple classes along with Ghost Recon's classic siege mode.