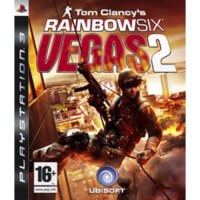 We buy for: £0.15
Sell PS3 Games. Get Cash for Tom Clancys Rainbow Six Vegas 2. The Rainbow Six Vegas 2 story runs in parallel to R6-Vegas. You are Bishop, one of Rainbow's top commanders, working with Logan Keller. You must lead your team into the unknown to end the terrorist threat led by Alvarez Cabrero and close the book on Vegas terrorist threat once for all. Key Features * Full PEC Experience: A greatly improved PEC experience - your character evolves online and offline, in both single-player and multiplayer modes. * Advanced Strategical A.I. Terrorist Leaders are now a strategic target for Rainbow - leaders control respawns, so when you take out the leaders, enemies can no longer respawn. Terrorists Enemies have a wider variety of reactions and use ballistic shields. Team Rainbow Can use the Leap-frogging technique for safely approaching an area defended by an opposing force. Teammates cover each other successively when they move forward. * Enhanced Multiplayer Modes. Up to 14 players * Two-player split-screen mode 13 maps for co-op and adversarial play Including three maps from R6 Vegas, revamped maps from R6 Raven Shield and all-new maps * All-new co-op experience. Co-op story mode. Two players can combine to play through the entire story mode Jump-in-jump-out mode. A second player can jump into a single-player at any point, becoming a fourth teammate in the Rainbow team Co-op terrorist hunt. Up to four players can work together to eliminate all terrorist threats on single and multiplayer maps * New adversarial modes. Demolition. Attackers plant an explosive device at one of two predetermined locations and protect the bomb until it explodes Team Leader Teams must keep their leader alive while they escort him to the extraction point while preventing the enemy from extracting their own leader