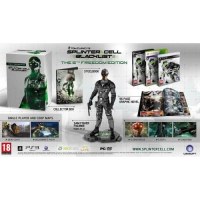 We buy for: £15.24
Sell PS3 Games. Get Cash for Tom Clancys Splinter Cell Blacklist 5th Freedom With Book. Tom Clancy's Splinter Cell Blacklist is a third-person oriented Action-Adventure Stealth game, which represents the seventh instalment in the best-selling Splinter Cell series. The game is focused around the return of Sam Fisher, serving as the leader of a new, more clandestine and untainted Echelon unit, and the unit's task to stop a countdown of terrorist events aimed at American assets around the world. Game features include multiplayer and co-op game support, the fluid tag-based "Killing in Motion" game mechanic and the option to complete missions by stealth. Stop the Blacklist Countdown Before It's Too Late. The United States has a military presence in two thirds of the countries around the world. A group of 12 have had enough and initiate a terror ultimatum called the Blacklist - a deadly countdown of escalating terrorist attacks on US interests. Sam Fisher is the leader of the newly formed Fourth Echelon unit: a clandestine unit that answers solely to the President of the United States. Sam and his team must hunt down these terrorists by any means necessary, and stop the Blacklist countdown before it reaches zero. Features: * Operate without Restrictions - Sam is back in his tactical suit and goggles, and he's more deadly than ever. He is the only secret operative with the power to act above the law, and uses ruthless methods to interrogate enemies in order to extract crucial information that will prevent the next Blacklist attack. Pursuing the terrorists to the far reaches of the world, Sam flies from exotic locales to US cities as he races against the clock to find out who's behind the Blacklist. Thrilling gameplay is enhanced by full motion performance capture, creating a highly cinematic experience. * Killing in Motion - Always one step ahead, the Killing in Motion game mechanic lets Sam strike with lethal precision by marking multiple enemies, and then eliminating them all in one fluid motion. Active Sprint allows him to traverse the environment easily and fluidly, climb walls and leap over barriers in order to reach his next target while on the move. * The Choice to Utilize Ghost Abilities - Players have the option of utilizing Stealth-based Ghost abilities to complete missions with minimal spilling of blood. * Unleash the Power of Fourth Echelon Prototypes - Infiltrate terrorist cells by using new gadgets such as the upgraded snake cam and micro tri-rotor drone which allows Sam to scout ahead, mark targets remotely, distract enemies, or explode with frag grenade force. Tom Clancy's Splinter Cell Blacklist is also bringing back fan-favorites like the sticky shocker, and for close quarters combat, players can wield the curved and brutal Karambit knife. * Build a New Echelon - With a mandate directly from the president, Sam is building a whole new Echelon unit; his team, his way. Anna "Grim" Grimsdottir is his technical operations manager, CIA operative Isaac Briggs brings additional firepower, and resident hacker Charlie Cole rounds out his support crew. Fourth Echelon is a fully mobile ops unit with unlimited resources and cutting-edge technology aboard the repurposed stealth airliner, the Paladin. * Enjoy a Fully Integrated Experience - Sam and his team are aware of terrorist attacks in real time thanks to the Strategic Mission Interface (SMI). The SMI allows the team to receive data about mission objectives while on the move. Players can earn money for completing missions and objectives and buy upgraded weapons and items from the SMI hub aboard the Paladin.