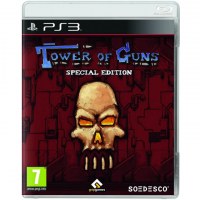 We buy for: £4.02
Sell PS3 Games. Get Cash for Tower of Guns Special Edition. Tower of Guns is a fast paced randomized FPS in the style of old school shooters, a short burst "lunch break FPS" not unlike Binding of Isaac mixed with Doom 2. If you're going to win, you will do so within an hour. That's big if though, because it won't be easy! With random enemies, random power ups, random bosses, tons of unlockable items and weapons and even random-level compositing you will never know what to expect! So grab a rocket-launcher, slap a shot gun modifier on it, pick up a hundred stackable 'double jumps' (or centuple jumps at that point) and get to conquering the Tower of Guns!