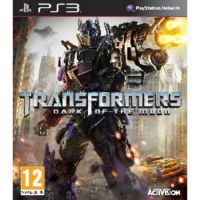 Transformers: Dark of the Moon

We buy for: £1.05
Sell PS3 Games. Get Cash for Transformers: Dark of the Moon. It has been three years since MEGATRON and the DECEPTICONS last threatened the world. Earth’s leaders believe that MEGATRON has fled the planet in defeat-but OPTIMUS PRIME knows better. An alien transmission is intercepted, exposing MEGATRON’S plan to spread chaos and fear among the humans, and unleash the ultimate DECEPTICON assassin: SHOCKWAVE! The AUTOBOTS must hunt MEGATRON, neutralise SHOCKWAVE, and save their new home from total destruction at the hands of the DECEPTICONS. STEALTH FORCE - ENGAGE IN EPIC VEHICULAR COMBAT. • Change the battle and instantly convert to a third, hybrid form that combines the weapons and firepower of robot mode with the agility and maneuverability of vehicle mode. PROLOGUE STORYLINE. • Experience the gripping battles and heart-pumping moments that occur before Michael Bay’s upcoming blockbuster film: TRANSFORMERS: Dark of the Moon. • Unravel MEGATRON’S plan to unleash the ultimate DECEPTICON assassin: SHOCKWAVE. • Play both sides as the iconic AUTOBOT and DECEPTICON TRANSFORMERS characters WAGE WAR ONLINE. • Jet, Truck or Car - Choose from three distinct character class chassis and unique weapon loadouts to create your own TRANSFORMERS character. • Level up your character - Earn XP in every match and unlock new character skills and abilities.