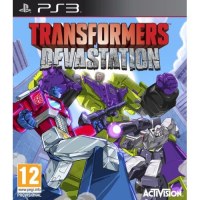 We buy for: £3.05
Sell PS3 Games. Get Cash for Transformers Devastation. The Transformers are back, and this time they're in the hands of acclaimed developer Platinum Games, who has married their over-the-top, stylish action with a major dose of nostalgia to create a Transformers game like none other. The Autobots face off against Decepticons when Megatron discovers a way to harness the enormous power of Plasma Energy to Cyberform Earth. Features: * Surprise your enemy: Platinum Games signature fast action allows instant robot to vehicle attacks, slam downs, counterattacks, and infinite combos for a unique master combat system. * Five playable Autobots: Wreak havoc on the Decepticons as Optimus Prime, Bumblebee, Sideswipe, Wheeljack and Grimlock. * Actors from the original TV series: Reprising their roles are Peter Cullen (Optimus Prime), Dan Gilvezan (Bumblebee), Frank Welker (Megatron and Soundwave), and more. * Play again and again: 5 difficulty levels with overhauls in enemy composition, combined with a deep customization system, means hours of intense gameplay.