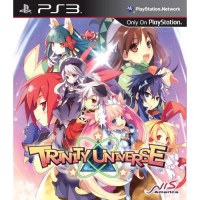 We buy for: £8.80
Sell PS3 Games. Get Cash for Trinity Universe. Trinity Universe combines the characters of the Disgaea and Atelier series together in an original world setting, where players must play as either the male or female main characters and protect the Netheruniverse from junk. Players will play through two storylines, both of which take place in the Netheruniverse where there's a serious problem with space debris. The easier of the storylines follows Kanata, a young demon god king who, rather than transforming into a demon god gem to protect the Netheruniverse like he should, decides to run away and enjoy a life where there's an endless supply of soba noodles. For more experienced players the second storyline follows the Valkyrie Rizelea who's taken it upon herself to restore peace in the Netheruniverse by hunting down the demon god king. Floating around the Netheruniverse are random piece of junk that range from refrigerators to birthday cake. In order for players to rid the world of these bothersome items, they must enter each piece of junk and destroy its gravitation core, causing it to float off into space. Players must also do battle against hordes of enemies, all of which want to keep the junk right where it is. However, there is a catch, players can't stick around for too long because there is a time limit to beat which certainly spices up game play.