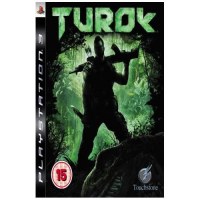 We buy for: £1.05
Sell PS3 Games. Get Cash for Turok Steelbook Edition. Steelbook Edition contains a 16 page artbook, and comes packaged in a premium tin case. Turok is an epic, story-driven first-person shooter set on a dark, mysterious planet in the future. Players take of Joseph Turok, a former black ops commando, now part of an elite special forces squad, known as Whiskey Company, which is on a mission on the role to take down a war criminal – Turok's former mentor, Roland Kane. While Turok and his men are traveling to the planet inhabited by Kane and his soldiers, Whiskey Company's ship is shot down. Stranded after the crash, Turok must use his elite military training to elude Kane's well-trained army (the Mendel-Gruman) and the dinosaurs, huge insects and other ravenous creatures that populate the environment. Turok's mission? Survive at all costs. Key Features Massive creatures – Encounter genetically altered dinosaurs, huge insects and other deadly creatures Strategic combat – Obliterate enemies with excessive firepower or utilize “quiet kill” techniques with specific weapons (the bow and knife) to remain undetected Cinematic experience – A deep plot is conveyed through cut scenes and flashbacks Dark, gritty sci-fi world – Realistic graphics and intense dynamic surround sound bring the planet to life Dino Luring – Try to turn the unpredictable dinosaurs into allies by luring them to attack human enemies or other creatures Dino Mauling – Dinosaurs pounce on Turok and he must struggle to pull himself from their jaws to avoid being eaten Realistic A.I. – Enemy soldiers respond dynamically to the player's movements and dinosaurs react in unpredictable predatory behaviors Multiplayer – Engage in online multiplayer matches for up to 16 players with terrifying creatures added to the mix; Modes are: Deathmatch, Team Deathmatch, Capture The Flag, Assault Capture The Flag, War Games, Co-Op (up to four players) ; 10 maps (seven for multiplayer; three for co-op)