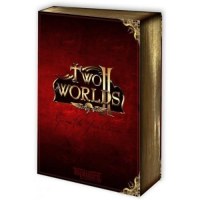 We buy for: £2.10
Sell PS3 Games. Get Cash for Two Worlds II Velvet Game of the Year Edition. Return to the vast world of Antaloor in Two Worlds II, the stunning sequel to 2007's Two Worlds. After their deception by Gandohar, the orc hordes are out for bloody revenge - along with a powerful female partner. Travel the lands and towns of Antaloor including an expanded area Southeast and experience breathtaking landscapes, lively cities, and the thrilling call of ferocious battle. Two Worlds II features a completely new gameplay engine, as well as a revised combat system, new enemies, improved animations and an enhanced AI. This combined with the extremely detailed, interactive environment, a totally revamped inventory and spell-management tool, and an improved physics system, will be sure to make Two Worlds II a must-have title for RPG fans. Features * Explore new, uncharted areas of Antaloor with the ability to sail the seas, delve into new underworld dungeons and caves, and traverse expanded lands to the Southeast * Expanded arsenal of weapon and magic, new monsters and animals, and a restricted magic and inventory management system * Set up four complete armor sets to swap into at the press of a button