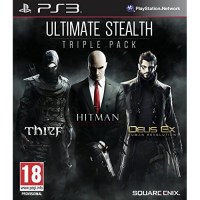 We buy for: £2.10
Sell PS3 Games. Get Cash for Ultimate Stealth Triple Pack. Three Award Winning Games In One Great Pack. THIEF. Garrett, the Master Thief, steps from the shadows into the City. With the Baron's Watch spreading a rising tide of fear and oppression, a mysterious sickness grips the streets. Led by Orion, the voice of the people, the citizens rise in bloody revolution. Garrett's thieving skills are all he can trust as he walks the fine line between politics and the people, entangled in layers of conflict. With time running out, the Master Thief unravels a terrible secret from his dark past that ultimately threatens to tear his world apart. Garrett never paid the price for anything… until now. HITMAN ABSOLUTION. HITMAN: ABSOLUTION follows The Original Assassin undertaking his most personal contract to date. Betrayed by the Agency and hunted by the police, Agent 47 finds himself pursuing redemption in a corrupt and twisted world. DEUS EX: HUMAN REVOLUTION. You play Adam Jensen, a security specialist, handpicked to oversee the defence of one of America's most experimental biotechnology firms. But when a black ops team uses a plan you designed to break in and kill the scientists you were hired to protect, everything you thought you knew about your job changes. At a time when scientific advancements are routinely turning athletes, soldiers and spies into super-enhanced beings, someone is working very hard to ensure mankind's evolution follows a particular path, and you need to discover why - the decisions you take and the choices you make, will be the only things that can change it. The long-awaited return of the award winning franchise that blends the best of Action and RPG: the perfect mix of combat, stealth, hacking, and social gameplay.