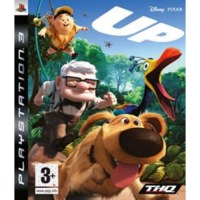 We buy for: £4.02
Sell PS3 Games. Get Cash for UP. The Up videogame will take players on an exotic adventure with Carl Fredricksen and his young sidekick, Wilderness Explorer Russell, as they set off on a wild journey through the undiscovered jungles of South America. Players will be able to experience all four main characters from the movie - Carl, Russell, Dug the lovable dog or Kevin the prehistoric bird - while playing as a single-player or with a friend cooperatively throughout the entire game. Players will encounter exciting, new environments as they navigate through treacherous jungle terrains, battle dangerous creatures and trek the slippery slopes of the Amazonian Tepuis. In addition, the game also features multiplayer game modes, including an epic level that will allow up to four players to compete in aerial combat. Features * Explore Exciting Environments: Explore jungles, caves, rock formations and Paradise Falls while avoiding dangerous plants and animals along the trail. * Battle Dangerous Creatures: Compete in aerial dogfight flight combat, evade dangerous dogs in dog chases and take part in large boss fights with exotic animals like crocodiles and anacondas. * Multiplayer Through the Entire Game: Play by yourself or with a friend via two-player co-op gameplay. Each character has special abilities to help the player in their quest. * Overcome Obstacles: Including rock formations, dizzying heights, raging rivers and weather challenges. * Find and Collect: Collect rare bugs, merit badges, and lost items from Carl's house and Ellie's adventure book to unlock cheats, bonus content, and bonus movies. * Conquer the Environment: Overcome hazards, move boulders, jump on teeter-totters and swing on vines to progress through the game.