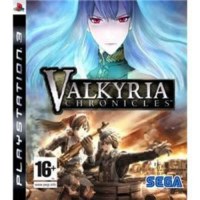 We buy for: £1.05
Sell PS3 Games. Get Cash for Valkyria Chronicles. In 1930s Europa, tensions rise to an all-time high between the continent’s two distinct military powers – the Empire and the Federation. In the struggle for ultimate supremacy, the Second Europa War (E.W.II) erupts, and Gallia, the small independent nation situated between the two super powers, now faces attack. The Empire's Imperial Army is first to strike Gallia, forcing the young lieutenant Welkin Gunther to pull back his small platoon. As the invading forces charge toward the capital city, Welkin discovers that not only are they outmatched in scale and weaponry, but the enemy army also has Valkyria, an unusually powerful race, in their ranks. As the war rages, the capital city is about to fall to the enemy, but Welkin’s unique battle strategies bring hope to his homeland… There may be a chance for Gallia after all.