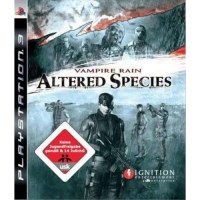 We buy for: £5.01
Sell PS3 Games. Get Cash for Vampire Rain Altered Species. Vampire Rain: Altered Species is an intense game that takes place during a dreary night in a suburban, west coast city in the US. For some time now, mankind has been battling the ferocious and terrifying Nightwalkers, a race of superhuman vampires who crave human blood. People have been disappearing at night; the lucky ones are found dead, but those less fortunate are reborn as Nightwalkers, and are bound by instinct to forcefully recruit unwitting victims into the Nightwalker army. Gamers take the role of John Lloyd, a member of a US special government unit created to defeat the Nightwalkers, and the only human to ever survive a physical encounter with them. * Take advantage of the shadows, high vantage points and the rain * Open a special mode the second time you play * Go online with up to 8 players across 9 diverse maps and 12 modes of play * Compare your skills with other online players with the Experience Points System