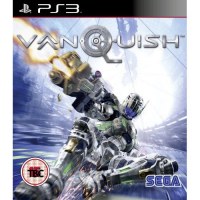 We buy for: £0.75
Sell PS3 Games. Get Cash for Vanquish. Vanquish is a sci-fi shooter of epic proportions with a fast, fluid and frenetic combat system, and an engaging and immersive storyline. The story takes place on a vast space station in a near future world where nations war over the planet's remaining energy resources. Against this backdrop, players take the role of Sam Gideon, a government agent kitted out with a futuristic battle suit. A versatile fighter with a huge arsenal of weaponry at his disposal, Sam also has an array of martial arts skills that he can use to take down his robot enemies. Features: * Fast, fluid and frenetic - This is gaming at its most explosive and exciting, as you storm into battle. * Experience a game character like no other - Sam is the ultimate weapon, donning a futuristic battle suit of destructive firepower and superhuman speed and agility. * Wage war in space - Fight your way through the enormous, open environments of the space station. The most advanced, futuristic city in the skies becomes home to the action. * Genre breaker - Taking the shooter genre to the next level by adding unique offensive and defensive moves, and kinetic melee combat. * Challenge and competition - VANQUISH will rate players on a variety of statistics, rewarding them for quick reflexes and strategic thinking, ensuring they will want to play the levels again and again.