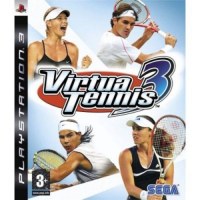 We buy for: £0.25
Sell PS3 Games. Get Cash for Virtua Tennis 3. * Featuring an all star cast of 17 fighters, including new characters El Blaze, and Eileen, Virtua Fighter will explode onto the next generation with the addition of the new "offensive move" * The latest instalment in the critically-acclaimed series,takes true advantage of the next-generation hardware with stunning HD quality graphics that pushes the new consoles to their limits. * Virtua Fighter 5 raises the bar for console fighting games including all the features fans know and love plus enhanced gameplay mechanics, additional characters and new fighting styles. * Virtua Fighter will deliver fast-paced,adrenaline-pumping action as players head into battle, taking on a host of popular characters.