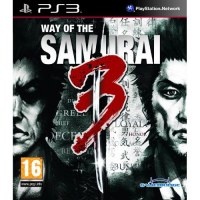 Way of the Samurai 3

We buy for: £8.25
Sell PS3 Games. Get Cash for Way of the Samurai 3. The consequences of your actions will determine your fate. Choose to fight alongside good or evil during the tumultuous time of the Sengoku era and carve your name into history. Become a hero or become infamous, the choice is yours. Take the role of a samurai and choose your own path, blazing a trail of honour, loyalty and respect or one of villainy, corruption and greed. The canonical series, best known for its high level of freedom and play style is back, with improved features, graphics and new gameplay mechanics sure to please fans of this enduring series. In addition to the various systems that made the previous titles so popular, Way of the Samurai 3 offers several new systems, including a "Sudden Battle System" that allows players to draw swords, even during in-game events, an "Original Blade Creation System" that allows players to combine parts to create an original sword, and a "Companion System" that allows players to select the woman of their choice to live with. Features * The butterfly effect - with over 15 different endings, every action you take has consequences, allowing for multiple outcomes and replayability. * Weapon customisation - craft your own unique weapons from over 200 different parts and materials, creating the ultimate weapon that suits your taste and fighting style. * Reward system and samurai rating - performing different feats will reward a player with Samurai Points and a title, which in turn will unlock new features and and characters within the game. * The pen can be mightier than the sword-fight your opposition with force or take the diplomatic route, using subtle gestures like the unsheathing of your sword.