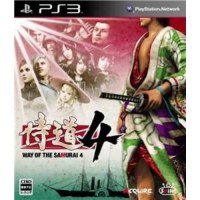 Way of the Samurai 4

We buy for: £7.76
Sell PS3 Games. Get Cash for Way of the Samurai 4. Way of the Samurai 4 takes place in mid-19th century Japan as the Edo period is coming to a close. For hundreds of years Japan has remained isolated from the outside world and free of foreign affairs or cultural influence. For the first time in centuries, Japan has opened its borders to the world beyond. This new cultural landscape has created numerous opportunities for the ambitious, and players are thrown into this world as a masterless samurai looking to make a name for himself. Players will begin their experience in Way of the Samurai 4 by crafting their own customized character. After creating their samurai warrior from one of three distinct age groups - youth, young man or middle-aged - players are cast into a tumultuous power struggle between three factions: the shogunate pro-governmental forces, the nationalistic isolationists, and the foreign powers that are heavily influenced by the British Royal Navy.