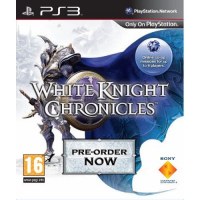 We buy for: £1.05
Sell PS3 Games. Get Cash for White Knight Chronicles. White Knight Chronicles is an epic role-playing adventure that transforms you into a towering warrior, seven metres tall. Customise and create your own incredible attack style and fight enormous enemies as the mighty White Knight in this epic role-playing adventure. Create your own character and take on colossal enemies in your search for Princess Cisna, then connect to PlayStation Network to continue the story with other players. Journey across the kingdom of Balandor or join forces with up to three players online. Discover more quests, fight fierce co-op battles and explore together in a breathtaking medieval fantasy realm. * Take the adventure online with up to three friends to enjoy thrilling quests and free-roaming exploration * Embark on a huge single-player quest, tackle online co-op missions with friends or team up and explore freely - it's up to you * Invent brand new combo attacks and craft your own fighting style