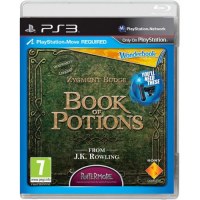 We buy for: £6.05
Sell PS3 Games. Get Cash for Wonderbook Book of Potions. Now try your hand at potion-making with Wonderbook: Book of Potions, the second Wonderbook product to result from Sony's partnership with Pottermore from J.K. Rowling. You'll compete for the Golden Cauldron to find out whether you really have what it takes to become a potions champion! Guided by the misanthropic but talented wizard potioneer Zygmunt Budge – a brand new character from the imagination of J.K. Rowling, creator of the Harry Potter series – you will navigate your way through a mysterious, enchanted garden full of thrilling challenges. Overcome dangerous obstacles by brewing all sorts of magical concoctions using an assortment of tools augmented onto your PlayStation Move motion controller, and learn some of the fun-filled histories behind each potion.