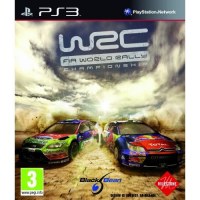 We buy for: £2.53
Sell PS3 Games. Get Cash for WRC: FIA World Rally Championship. World Rally Championship is back again after a long while! WRC: World Rally Championship is the unique off-road racing experience and the only title that brings the official cars, the real thrill of racing against the clock and the excitement of drifts and handbrake turns. Features * Road To WRC: face the extraordinary career mode which will allow you to go through the steps of a real driver of WRC! Start by building up your own team and participating in regional championship, moving step by step to most prestigious categories and conquering a contract with the official teams of WRC * Time Attack: choose your favourite car to set the record on your favourite special! You'll be able to upload the ghost of your best performance and download those of the world record holders! * Online Ranking: compete in the online section facing the other players worldwide: you'll be able to organize or participate to completely customizable Single Stages, Single Rallies or Championships! Earn experience with your performances and raise your online ranking to become the Number One! * Incredible Weather Conditions: from the snowy tracks in Sweden to the dusty desert in Jordan, through the technical asphalt trails in Spain!