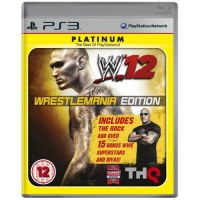 We buy for: £0.25
Sell PS3 Games. Get Cash for WWE 12 Wrestlemania Edition. The WrestleMania Edition includes all DLC Packs. Every champion must reinvent himself, and every Superstar has an evolution. Reinvented with each challenge, always primed and ready to strike with more edge and intensity than ever before, he is reborn – bigger, badder and better. FINALLY … the WWE experience you’ve been demanding has arrived! THQ’s flagship franchise in the company’s WWE videogame portfolio is reborn, delivering the best and most realistic WWE action ever. With new Predator Technology, an overhauled gameplay experience and new broadcast TV presentation that promises the most fluid, dynamic, authentic and action-packed WWE simulation experience to date, WWE ‘12 gives you more control over WWE than ever before. Features: Added Content – In addition to the full WWE’12 videogame, The WrestleMania Edition includes all downloadable DLC Packs: • WrestleMania Pack; Shawn Michaels, Jerry “the King” Lawler, Michael Cole, Jim Ross, Road Warriors alternate Costumes, Edge alternate Costume, Christian Alternate Costume. • Divas PackKharma; Trish Stratus, Vickie Guerrero, Nikki Bella, Brie Bella, Alicia Fox. • Legends Pack; “Macho Man” Randy Savage, Mick Foley, Batista, Brodus Clay. • Also includes The Rock, winner of the ‘Once in a Lifetime’ match at Wrestlemania 28; Play as the most electrifying man in all of entertainment!