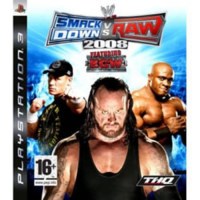 We buy for: £1.05
Sell PS3 Games. Get Cash for WWE SmackDown Vs Raw 2008. WWE SmackDown vs. Raw 2008 lets players develop the WWE Superstars of today into the legends of tomorrow. The 1 wrestling franchise in the world delivers more depth and strategy with prominent new features, key annual enhancements and incredible graphics while making its much-anticipated debut on three new video game systems. It's time to live the life of a Superstar. How will you play? * Superstar Fighting Styles: With eight Superstar Fighting styles to choose from, playing WWE SmackDown vs. Raw 2008 will never be the same. Each fighting style has its own unique strategy with exclusive moves, abilities, attributes and more. Take the fight into your own hands and feel the power of the Superstars * Struggle Submission System: The new Struggle Submission System gives players intuitive and natural control over their WWE superstars using the analogue sticks. Realism and strategy are at the forefront, as players can now control the amount of pressure they apply * ECW Presence: The life of a WWE Superstar isn't always pretty. ECW invades WWE SmackDown vs. Raw 2008 with a variety of Superstars, arenas and weapons * WWE 24/7 Mode: Combining the popular Season and General Manager Modes from the previous SmackDown vs. Raw games, WWE 24/7 Mode embraces the intensity of the Superstar lifestyle. Multiple character development options, stats tracking and career goals will guide players toward the ultimate achievement of becoming a legend * Giving the fans what they want: WWE SmackDown vs. Raw 2008 offers numerous updates, including new rosters, more environmental hotspots, improved out-of-ring action, enhanced online community support and much more!