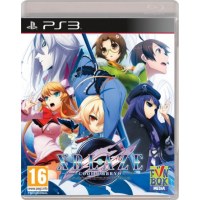 We buy for: £2.10
Sell PS3 Games. Get Cash for Xblaze Code Embryo. The BLAZBLUE series became an unprecedented hit as a completely original arcade fighting game. This title expands the popular Blazblue story mode so players can sit down, relax and be amazed while the story unfolds in front of their eyes. This game will not be like your conventional visual novel where it forces you to select choices with a button. This is a new type of visual novel where we use a state of the art information tool which will branch the story into different paths. Features: * Beautiful Japanese animation/manga artwork. * Extremely famous manga voice actors including Tomokazu Sugita, Akira Ishida. * Graphic Art, Movies and Music unlock and appear in your gallery as you progress. * Total of 14 Episodes with 11 different routes/endings. * Over 30 hours of gameplay.