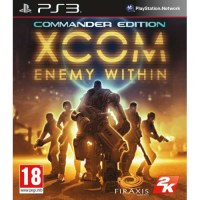 We buy for: £1.76
Sell PS3 Games. Get Cash for XCOM: Enemy Within. XCOM: Enemy Within is the expansion to the 2012 Game of the Year award-winning strategy game XCOM: Enemy Unknown. Enemy Within adds an incredible array of new abilities, upgrades and weapons to combat new enemy and alien threats. This expansion pack also introduces new maps, new tactical and strategic gameplay, and new multiplayer content providing a fresh new gameplay experience. Features: • New Soldier Abilities: Research a new alien technology to advance the capabilities of your operatives. • New Weapons and Equipment: Give your operatives an extra tactical edge with new projects from your engineering team and the Foundry. • • New Enemy Threats: Adopt new tactics to counter the threats from two new alien classes including the Mechtoid. • • New Strategic Resource: A valuable new alien resource, known as MELD, has been released onto the landscape providing access to new research and upgrades. • New Tactical Challenges and Maps: New tactical challenges are introduced across an additional 47 maps. • •New Multiplayer maps, units, and abilities: Create your custom squad from a wider array of options and dominate your opponent in intense, one-on-one, turn-based matches.