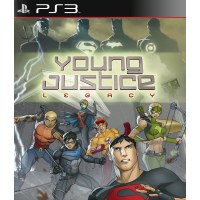 We buy for: £3.05
Sell PS3 Games. Get Cash for Young Justice: Legacy. From the creators of the critically acclaimed Cartoon Network hit series comes Young Justice: Legacy, a new generation of superheroes who are protegees of Batman, Superman and other great heroes. Young Justice: Legacy follows teenage protegees proving themselves as superheroes while dealing with normal adolescent issues in their personal lives. Features: • 12 playable characters including Robin, Nightwing, Super Boy, Beast Boy, Batgirl, etc., all voiced by the original TV talent. • Battle infamous villains: Bane, Riddler and Lex Luthor in 16 missions around the world. • Level up your favourite characters, enhance their equipment and earn new abilities • Multi-player and co-op modes for up to 3 players. • Original story from show creators bridges the five-year gap between seasons one and two, with plot twists and unthinkable surprises. • Players test their mettle with fighting styles, weapons, power-ups and witty banter • Unleash individual and team based combos. • Be mentored from the best - Batman, Superman, Flash and more.