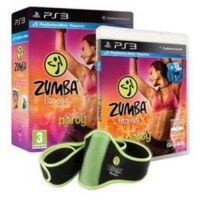 We buy for: £1.05
Sell PS3 Games. Get Cash for Zumba Fitness Join the Party With Belt. Zumba Fitness is an interactive video game based on the successful dance fitness program that has helped melt the pounds and inches off seven-and-a-half million Zumba enthusiasts in 105 countries. Zumba Fitnessis a one-of-a-kind game that pairs Latin rhythms with red-hot international dance steps so you can have a blast as you party your way into shape, unencumbered by a controller. In the Zumba "exergame", players can learn and perfect nine different dance styles: Reggaeton, Merengue, Salsa, Cumbia, Hip-Hop, Mambo, Rumba, Flamenco and Calypso. The game features 30 different infectious music tracks and routines--some exclusive to the game--led by Zumba creator Beto and celebrity instructors Gina Grant and Tanya Beardsley. No matter what your skill level, the Zumba game is accessible to all with Learn the Steps training, plus Beginner, Intermediate and Advanced routines in five dynamic venues. As you hit each move in rhythm with your on-screen Zumba instructor, the stage transforms into a high voltage party atmosphere with special effects and additional crowd dancers. Players can partner with a fellow dancer to try to earn the highest collective workout score or dance off against each other in Zumba Attack multiplayer mode. Players can also log in to Xbox LIVE and coordinate a Zumba online class with up to eight friends. Future downloadable content will introduce new music and dance routines to keep the party going. The Zumba program pairs red hot international dance steps with sexy Latin music to create an ultra fun fitness party on your console that's focused on the joy of movement. Follow along as Zumba instructor fan favorites Tanya, Gina and Zumba's creator Beto guide you through more than 30 routines that will make you forget you are even exercising.