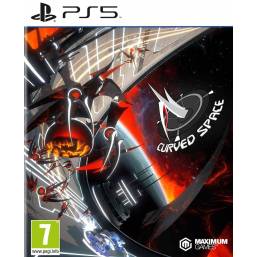 We buy for: £4.02
Sell "Curved Space" on PS5 for Cash, See your Price Above. Old school shoot 'em up reimagined.Curved Space is an intense arcade-style twin-stick shooter that takes the classic formula and plunges it into the weirdest reaches of space. Battle cosmic space-invading spiders across curved landscapes where bullets hug the terrain while the horizon drops sharply out of sight.Inspired by arcade classics, players will have to hunt for weapon power-ups and upgrades while dodging enemy fire, blasting interdimensional bugs, and wrangling some enormous boss monsters. Simple to learn as you fight your way through the branching story-driven campaign, but tough to master as you chase the glory of the leaderboards.Features: Old school shmup reimagined: Enjoy the high-energy action of traditional 2D shoot 'em ups in a warped 3D space. Climb walls, flip over to the other side of your environment, and experience breathtaking vistas. Play your style & top the leaderboards! Ride the synthwave: Get in the zone with a high-energy synthwave soundtrack in partnership with Fixt Neon, featuring artists like Scandroid, 3Force, and Fury Weekend. Upgrade & take them down: Collect a plethora of ability and weapon upgrades. Weapons are varied (from lasers to flamethrowers to weed wackers!) and equipped with their own Overdrive States!