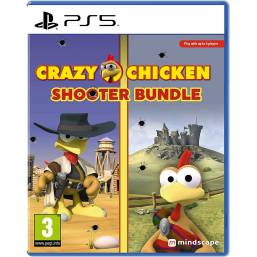 We buy for: £6.05
Sell "Crazy Chicken: Shooter Bundle" on PS5 for Cash, See your Price Above. Discover a dark mystery only a medium can solve. Explore the real world and the spirit world at the same time. Use your psychic abilities to solve puzzles spanning both worlds, uncover deeply disturbing secrets, and survive encounters with The Maw - a monster born from an unspeakable tragedy.The Medium is a third-person psychological horror game that features patented dual-reality gameplay and an original soundtrack co-composed by Arkadiusz Reikowski and Akira Yamaoka. Features: Variety of game modes - play in single player, shoot as many chickens as possible to get the most points to beat your record. In the 1 vs 1 duel, players compete to hunt more chickens than their opponents in only 90 seconds. In local multi player, 2 to 4 players take turns to see who aims better and shoots faster! Speed - choose one of three speed settings for maximum hunting success. Rankings - Beat your own top scores over and over again and compete against friends and players around the world for top position on the leaderboards. Online/Offline - Play whenever and wherever you like. No internet connections needed to hunt. However, you need an internet connection to put your best score on the global ranking and to see other players scores.