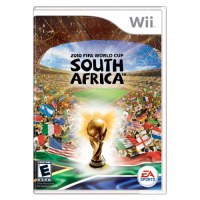 We buy for: £0.50
Sell Wii Games. Get Cash for 2010 FIFA World Cup South Africa. Celebrate the single largest sporting event on the planet with the only official and exclusively licensed videogame on Wii for the 2010 FIFA World Cup. Experience an action-packed, easy-to-play football game that brings friends together in their living rooms to compete for the 2010 FIFA World Cup with 2010 FIFA World Cup: South Africa. Take on the challenge of leading your home nation in the official 2010 FIFA World Cup tournament, from the group stage through the knockout rounds to a virtual re-creation of the championship final. Presented in an art style that celebrates the cultural vibrancy of the first FIFA World Cup to be held in Africa and in true-to-life detail, including confetti rain, streamers, and fireworks, 2010 FIFA World Cup features all 10 official licensed stadia in South Africa and all 199 national teams that took part in qualification. The stage is set for 32 friends to compete for the chance to be crowned 2010 FIFA World Cup champion. Score the goal that lifts your nation to victory and mark the occasion with user-controlled celebrations. Travel around the world to take on all 32 nations competing in the 2010 FIFA World Cup in head-to-head challenges in Zakumi's Dream Team. Start your journey with random players and then build your team by stealing an opposition player after each victory. Win a challenge and pick a player until you have conquered the world and built Zakumi's Dream Team. Plus, take your team to a friend's house on your Wii Remote. Compete in a multiplayer, knockout-style tournament against up to 3 friends in Global Elimination. Draft and strategically select countries to play as, create alliances and gang-up on rivals until only one player is crowned champion.