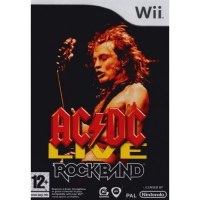 We buy for: £2.10
Sell Wii Games. Get Cash for AC/DC Live Rockband. AC/DC Live: Rock Band is a whole new way for music fans to experience rock's most timeless and hardest hitting act. Featuring 18 tracks from AC/DC's epic, live performance at Castle Donington in 1991, the standalone game allows players to experience the glory of playing live on stage virtually just like AC/DC, one of the greatest rock bands of all time. In addition, all 18 original live tracks on the AC/DC Live: Rock Band soundtrack can be exported to Rock Band and Rock Band 2 for play in all game modes including World Tour and Battle of the Bands Challenges. Key Features: * 18 Classic AC/DC Hits – AC/DC like you've never heard them before with access to 18 tracks from one of the band's legendary 1991 live performances! * Export Tracks – Export all 18 tracks for play with Rock Band and Rock Band 2 games including World Tour mode and Battle of the Bands Challenges! (Available for Xbox 360 and PS3 versions only) * Full Rock Band Modes – Hours of play with Tour, Quickplay, Head to Head, Practice and Tutorial modes! * Rock it Alone or in a Band- Master AC/DC's greatest hits with up to four people on vocals, guitar, bass and drums! * Drumming in the spotlight! Showcase a real drum solo with Rock Band's freestyle drum fill windows featured in each song. Break out your own rhythm and style as anything goes! * Call out the crowd! Vocalists can bring the crowd to their feet during Rock Band's freestyle vocal fill windows. Ad-lib your own words or shout to the crowd to raise the rock intensity of the performance.