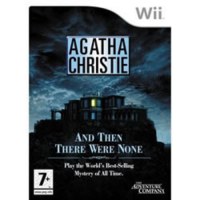 Agatha Christie: And Then There Were None

We buy for: £1.32
Sell Wii Games. Get Cash for Agatha Christie: And Then There Were None. Agatha Christie’s world-famous novel, And Then There Were None, is brought to the PC with all of its original baffling suspense! 10 people, strangers to each other, are all invited to a lavish estate on an isolated island. Through a recording, their mysterious host accuses each of his ‘guests’ of murder and proceeds to exact ‘justice.’ Tension mounts as, one-by-one, the number of people are reduced through the ingenious plotting of the unseen killer. Prepare yourself for an investigative thriller like never before! New twists-and-turns to the original story, plus a brand new character has been introduced – YOU. Multiple game endings – the ending is entirely in your hands. If you know what happens in the book… you don’t know what happens in the game! Breathtaking 3D graphics that will immerse you into this thrilling mystery. Original and creative puzzles that will challenge you throughout the game. Will you be the one who survives the longest? Only time will tell… 20+ hours of engrossing gameplay that will keep you on the edge of your seat.