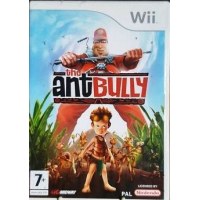 We buy for: £0.25
Sell Wii Games. Get Cash for Ant Bully. Based on Warner Bros. Pictures` digitally animated family adventure The Ant Bully, Midway`s action/adventure videogame allows players to experience and explore the marvels of the insect world. Players will take on the role of Lucas Nickle, an outcast 10-year-old who turns his frustrations on the defenceless ant hill in his yard and its tiny inhabitants. In an act of justice, the wizard ant Zoc magically shrinks Lucas to the size of an ant. To earn his freedom Lucas must learn how to live among the colony and survive the perils of the insect world. As part of his incredible adventures, Lucas will experience the daunting scale of an ant living in a human-sized world. The player, as Lucas, will evolve from ant bully to ant hero as he leads the colony in an epic life and death struggle to save the insect world from certain extermination. Features: * 18 different missions and boss fights inspired by the movie. * Get an ant's-eye view of locations like Lucas' Yard, the Broken Glass Garden, Caterpillar Stables and the Frog Pond. * Use telepathy to get help from your fellow ants -- have them form bridges, catapults and ladders to help traverse the environment. * Face off against multiple threats - Wasps, termites, humans, pill bugs, spiders, earwigs, fleas and mosquitoes. * Exciting aerial battles as you control a wasp for airborne combat.